Travel Diary of a Palestinian to World Youth Days in Krakow 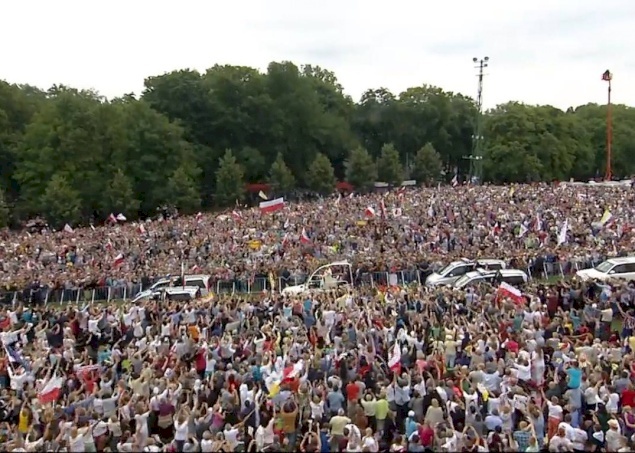 POLAND – Nearly 700 young people from the Diocese of Jerusalem left on Monday to take part in the World Youth Days, which will take place this year in Krakow in Poland. In this report, we will show their timetable in Poland, starting as of their outset from Jerusalem to Mass with Pope Francis, through George’s diary (an alias).

Summer 2016. George is the fictitious name of a young Palestinian Christian from Jerusalem, who is participating in WYD 2016, together with Pope Francis. He lives his daily enriching experiences, which shape his soul, tired and weary of the superficial life centered on materialistic and egocentric concerns.

From Jerusalem to Ben Gurion Airport

No sleep this night of 17 to 18 July. Last minute preparations of this 2-week long trip to Poland makes me sleepless. I don’t want to forget anything. Anyway it is not worth sleeping for one hour since departure is scheduled from Notre Dame Center at 2 o’clock in the morning. Our flight is at 7:50 in the morning, and this time we won’t fly from Amman but from Ben Gurion (Tel Aviv). Is this the best of decisions? Opinions differ, some stress on the strict control, which Palestinians go through at Ben Gurion Airport.

At dawn, a small thought brings me closer to God. I pray to Him to “bless” my pilgrimage and that of 180 Palestinians of the youth and those who accompany them at WYD.

At 3:45 am, we arrive at Ben Gurion Airport. A first control at the entrance, then we head on to the Terminal. We didn’t know until then why we had left so early. But when we stood at the counter we understood that the check-in would take some time. As a matter of fact we wouldn’t be out before 8 am! No problem as we still have some more minutes left before boarding. We have forgotten the second but strict control we shall pass through, as Palestinians, before getting to Passport Control. They checked us, along with our travel bags twice before letting us move to Passports Control. We are late! the flight has to be delayed by one hour and half.

From Tel Aviv to Warsaw

We have filled an aircraft Low Cost, the only group in the aircraft. There are those who travel for the first time in their life. Some fear flying, one or two people felt dizzy. But the situation is under control. After four hours and half of travel, we arrived in the Polish capital. Warsaw is a modern beautiful city, which we shall visit later. For the moment we are all exhausted and we think of only one thing: to sleep in order to catch up the 24 sleep-less hours.

From Warsaw to Torun

A surprise! We shall have to take buses to go to Torun, which will host us for three days, located at a three-hour bus drive to Warsaw. The youth groan a bit; however, the welcome, so warm and carefully prepared by our Polish friends, has relieved us and incited us to show patience. In the bus they spent time either taking a nap or talking. They are quite wise, maybe because of exhaustion. It’s time for me to sit and think and perhaps to pray. For me WYD represents two main pillars: prayer and fraternity.

In Torun the welcome is incredible. Just perfect! I think that the Polish people, when committed, do a perfect job. I also tend to think that we, Palestinians in particular and Arabs in general, have something to learn from these people. Values that we still miss: a spirit of discipline at work, of commitment, of striving for the common good. A solemn Mass was celebrated at the Church of the Military dedicated to St. Catherine, an impressive Gothic monument of the 19th century. Liturgy was animated by our Polish friends, a small very motivated African group, and ourselves.

Mass was followed by a royal dinner in the school hall where we have lived for three days.

First day is over. We need to sleep ahead of the following busy day. Thank you Lord, you have filled me during this long day of friendship and cheer, grant me a heart which listens, a heart at peace, a wise heart, to live fully the coming days in your presence and in your love. Heal my soul, I am thirsty for peace, for Your peace.

It is 8 am; breakfast is ready in the same hall like the day before. On the menu: eggs, ham and Polish butter, different kinds of cheeses, very good bread and fresh jam. Polish cuisine continues to impress us.

The programme includes several visits in town. We attended a conference in the Governorate where we met with the Governor. We went on a visit to town where we discovered the statue of Nicolas Copernic. We visited a museum showing the life of Father Jerzy Popieluszko, a leading figure of the resistance against communism in the 80s. This young priest, who gave his life for the liberation of his country, had been brutally assassinated by communists.

After having a delicious lunch, we went to visit the model of a traditional Polish village of the 18th or 19th century, before learning to prepare the reputed Polish spices bread. A concert was held by military and by a young Palestinian musician of Nablus, who lives in Poland, who had founded with Polish friends a group of Eastern and Western music, called « boukra » – meaning « Tomorrow » in Arabic.

Back to our residence, we took advantage of some free time to explore the town in small groups of ten people. I was able to discover together with friends from this group and Fr. Martin Schmidt (the priest who organizes this welcome) the Polish beer and what remains of the old city of Torun, especially its mediaeval walls and its river.

Thank you Lord for this second day. Teach me to enjoy beauty, in both simplicity and modesty. Teach me to be more attentive to others, to their needs and weaknesses. Grant me the desire of integrity and perseverance. Amen.

Following Mass celebrated in early morning inside a captivating Gothic church, dating back to at least 7 centuries. We are in the bus, heading to Gdansk, a northern town located on the Baltic Sea. The journey is long and will last for two hours. We are exhausted and quiet, which nevertheless enables me to ponder for a while.

It is important though to talk to God to avoid spiritual dryness. Prayers, liturgy and even mass itself are not enough for a person who seeks closeness with God. That’s why, even during vacation (and more so during these Youth Days, spiritual days par excellence), a Christian should seek to pause a moment for silence and self-examination to absorb what is given to him to live, in order to grasp the depth of the meaning of this experience, despite the temptations which may cast him far from these privileged moments.

After a two-hour bus drive, we are on the way towards the European Centre of Solidarity, a museum dedicated to the history of liberation of Poland from the tyranny of communist regime during the 80s. I was moved to see how solidarity, and perseverance, played an important role in achieving the bigger projects of a man who, put under oppression, injustice and different forms of tyranny, continues to look for liberty and justice.

We cannot applaud with one hand, we need two, says the Arabic proverb. A lesson and an example full of hope for us Palestinians still living under Israeli occupation, but also the selfishness of our political leaders who should learn, like the Polish workers, to work together, and have a dialogue.

After a quick visit to the centre of the town, we head off northwards to the Baltic Sea. For us, who are used to Mediterranean climate, the difference is striking.  Nothing in common, landscapes, water colour, temperatures.

In the evening we get back to Torun, exhausted but happy after this day rich in emotions. We need rest if we seek to go until the end of the wonderful experience. Tomorrow we shall proceed to Warsaw, where we shall spend four days before meeting the Pope and the three million young Catholics expected in Krakow. 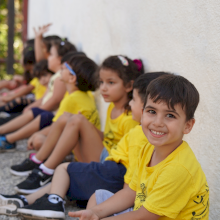 Summer camps for the youth: "Growing in faith, happiness, peace and chari...